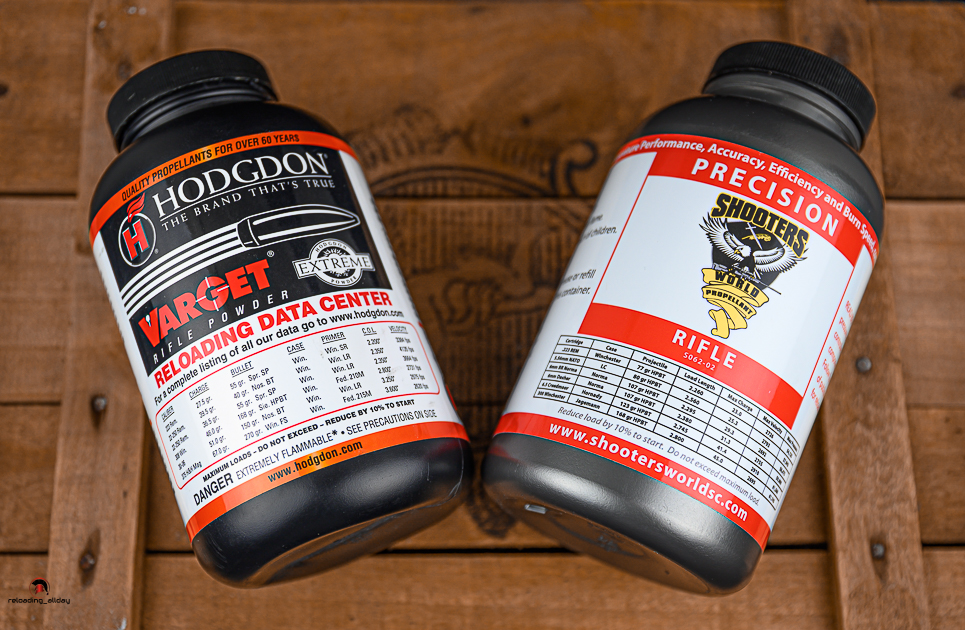 By Reloadingallday
3.24K Views
17 Likes
20 Comments
What’s up Reloaders!
We’ve been asked to compare Varget and Shooters World Precision powder.
These two powders are incredibly similar, so we broke the testing down to the following criteria: Powder characteristics, metering, grouping, temperature sensitivity, how clean the powder burns, and flash difference. 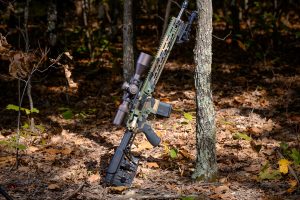 To perform these tests, we’ve used the following components for a .223 build from Brownells.
Upper receiver
Vortex Razor HD Gen II 4.5-27x56MM FFP H59
American Defense Recon QD Mount
Cross Machine Tool Ambidextrous Match Receiver Set
Aero Precision Upper Parts Kit
Spikes Tactical Nickel Boron BCG
Power Custom Steel Charging Handle
18″ White Oak Armament 223 Wylde Match Barrel
Geissele MK4 Super Modular Rail
Seekins Precision Adjustable Gas Block
Spikes Tactical Rifle Length Gas Tube
Dead Air Armament- Sandman Keymount Brake
S-BRM Harris Bipod
Cerakoting Republic Rifle God’s Plaid
Lower Receiver
Cross Machine Tool Ambidextrous Match Receiver Set
Geissele Lower Parts Kit
Geissele .154″ SSA-E Trigger
Ergo Grips Suregrip
Magpul PMAG 20 Round Gen M3
JP Enterprises Silent Captured Spring Gen 2 H2 w/ Alt Spring Pack
Luth-AR Brownells Stock Kit
Cerakoting Republic Rifle God’s Plaid
Now, let’s get down too it.
Powder Shape and characteristics
Varget has a long track record of being a favorite among hand-loaders for its temperature stability, quick ignition, and clean-burning after effect. The powder itself is an extruded powder that produces high velocities. Moreover, the actual bulk density we found, when testing 3 different lots, was 0.890 grams/cc, 0.892 grams/cc, and 0.897 grams/cc. While the dimensions of each granule, we found them to have a diameter from 0.031″ to 0.036″ but most were 0.034″. The length was approximately 0.060″, however, varied from 0.058″ to 0.062″
Precision also has a track record of having similar characteristics to Varget. The powder itself is an extruded propellant. The bulk density from two lots ranged from 0.885 grams/cc from an older lot to 0.889 grams/cc of a newer lot. The diameter of each granule we found to be 0.026″ and did not vary much. From the majority, we found very few that were 0.027″ on our end. However, we did find the length to fluctuate between 0.050″ to 0.060″, but the majority were 0.055″
We also found the color characteristics to be widely different. If you ever used Varget, you know it has a green tint to it. Whereas Precision has a darker black look to it.
Why is the color important? 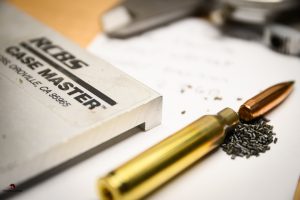 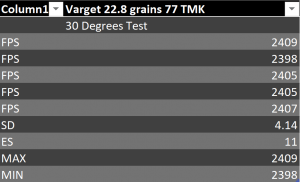 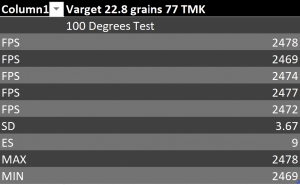 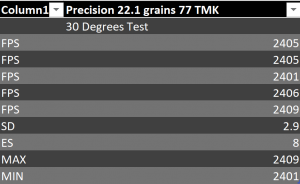 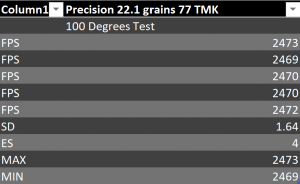 In retrospect, these numbers jumping around 60+ FPS is pretty solid for both powders being temp stable. You should also remember this is coming out of an 18″ barrel with safe loads. We were chasing the best groups and not the most FPS. Your results can vary on several different factors. However, this is within the ballpark based on what you will find conducting your tests.
Powder burn
For testing the difference in which two powder burns the cleanest, we decided to weigh a cleaning patch before and after to show how much crap was left in the barrel that performed a 50 shot string. While using CLP, we first started by scrubbing one patch through the barrel up and down 10 times with a generous amount of CLP. After that, we then continued to pass patches through and weigh them till they came out perfectly clean. While cleaning, we had also placed another patch at the base of the barrel to catch any remains that had pushed itself out of the barrel. Each patch will be weighed on a scale that’s accurate to 0.1 of a grain. 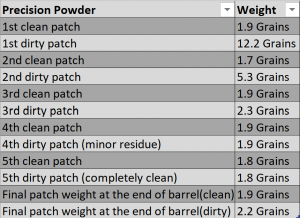 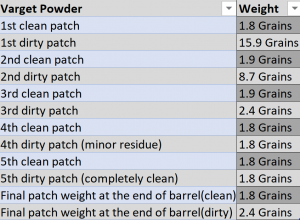 Muzzle Flash
For this test, we conducted it during night time for the best results. After reviewing our footage, we concluded that neither Varget nor Precision had more or less flash than the other.
Final thoughts
Varget and precision are both extremely temperature stable powders. In the future, I will personally continue to use both. However, I will say, whichever one is in stock, which Varget tends to fly off the shelf. Precision is a great and cheaper alternative to have in your toolbox if you don’t have a bunch of Varget laying around. I highly recommend you give it a shot. pun intended. For those of you who want to get some Precision powder, I got a code just for you at Midsouth Shooters Supply. They are one of the few people who currently sell Precision, as you usually won’t find it in mom and pop shops yet. Use code: SWART1119
This code will get you half off Hazmat just for being a reader.
If you enjoyed this article, please support us by using the links and code to acquire anything that you may need to make some handcrafted rockets. It supports us and ultimately helps us continue to put out content. We do not get paid by any companies we write about. All our efforts are unbiased and we try to put out the most factual data to give you the truest representation of anything related to hand-loading. No one likes a biased article. A huge thank you also to our followers and subscribers. Without you, we wouldn’t be able to do tests such as this.
A special thanks also to Bryce over at LRSU (Longrange Shooters of Utah) for the build idea and recommendations on parts. Check him out on Instagram, he posts amazing long-range shooting content and is one of the most humble people I’ve ever had the chance of talking too.
Also, another thank you to Republic Rifle (best damn cerakoter around), Vortex Optics, and Brownells for coming together to make this article possible.
As always, shoot straight, be safe, and happy reloading! 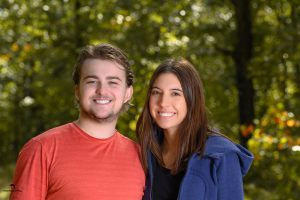 Blake has been writing reloading articles for three years and helping out within the community to further enhance reloading education. In his free time, he works within the community to help out new hand-loaders by educating them on the many variables that come with this wonderful hobby. His passion is solely based on educating others so that they may pass on that information to future generations, keeping the art of hand-loading alive.

Disclaimer:
The content you are about to read is for demonstration purposes only. This includes videos, blog posts, articles, and all information associated with this website
Do not attempt anything you see on this website. Again, these are for demonstration purposes only.
If you see reloading data and or comments, please refer to the manufacturer of your choice and contact a technician. We are not responsible for any false data or comments from individuals.
Again, this is a demonstration for reloading. Please contact or take classes from certified reloading instructors or contact the manufacturer of your choice.
Please, do not attempt to tamper or modify with ammunition or firearms. Seek out a licensed professional or gunsmith. Any information you watch or read on this website must be assumed to have error and should not be performed.
Reloadingallday will not and cannot be held responsible for harm caused to readers and watchers. The material that is covered is for demonstration purposes only. Please be aware that hand-loading and other topics covered is very dangerous and you are within full responsibility and liability for your own actions.
Reloadingallday is also not responsible or liable for any damage that might be caused due to those who enter this website and read any of our material or watch. Again, this is for demonstration purposes only.
By reading this article, you are agreeing that you are responsible for yourself, everyone around you, watchers, viewers, commenters, and fans. You are also agreeing that you are responsible for the safety and property as follows: yourself, everyone around you, watchers, viewers, commentators, and fans. Also, you are accepting that you agree with everything this disclaimer has written down.

Disclosure of Material Connection: Some of the links in the post above are “affiliate links.” This means if you click on the link and purchase the item, the author of this post will receive an affiliate commission. This is being disclosed in accordance with the Federal Trade Commission’s 16 CFR, Part 255: “Guides Concerning the Use of Endorsements and Testimonials in Advertising.”

How did I not see this earlier?!
For anyone wondering about burn rate, Ken Johnson (SW Ballistician) told me that Precision is just slightly faster than Varget.
Interestingly, Lovex lists S065 ( SW Long Rifle) as their Varget “equivalent” in their burn rate chart, though I’m not sure about caliber usage (SW lists usages for powders that Lovex does not and vice versa).
This discrepancy could explain Precision (Lovex S062) being slightly faster than Varget.

I’ve found that messages to SW usually get answered in a day or so.

Great read. Very informative and well done. Thank you for taking the time for it. Could you test the same powder under FT/R competition conditions where we fire 20 rounds from a 30-32″ Bartlein Heavy Palma barrel within 30 minutes in a .308? And then do it again at 4 different ranges out to 1,000 yards? Those are the conditions where Varget will likely excel. Most all FT/R shooters use it. There are a few other powder followers out there, but I’ve not heard of any winning NATs or in the top 10 in the World class events. The USA… Read more »

Awesome review. I replaced Varget with Precision Rifle and difference while minor were consistent. My go-to for 308 Winchester.

Thank you very much. As you read, we experienced the same thing.

Yes we did, and that just reinforced my beliefs and makes me smile. Nice to see! And was a fantastic read. Nice article!

Quite a scientific testing process! I’ve not played with Varget in a very long time, and I can’t ever seem to find any Shooters World powders in any of my local stores. I would like to try some, but wouldn’t have any idea which one to buy. At least your comparison showed a direct relationship between S.W. and Varget, now I have a bit more to go on. I suppose I will go to Shooters World’s website for more information. Thank you for your precise analysis.

Hey, Jerry! I appreciate it. I actually dropped a code at the very end of the article in Bold for you to use for half off hazmat for just being a reader, it supports me and my team for making articles like this as well, so we can put out more in the future.

Unfortuantely a lot of mom and pop shops don’t carry their powders yet, but, they soon will be. In the meantime the code is good for midsouth shooters, who seems to have the best deal on SWP Powder. Thanks again!

Thank you for the code for half off hazmat. I’ll do some research into Shooters World, and since I use and trust Midsouth for many of my reloading supplies, I’ll use it. Thanks again!

No worries! It’s what we do!

I have started buying equipment but not yet reloading. My hornady manual doesn’t have these powders.

Is there a better / different manual I should buy?

I have six different manual’s ranging from speer , Sierra, nosler,hornady and lyman

Great article. Thank you for writing it and doing all the testing. Great information. We all need more powder options.

Thank you! Next up is Titegroup vs Cleanshot! 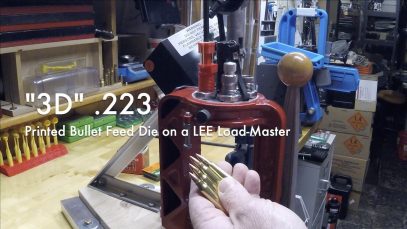 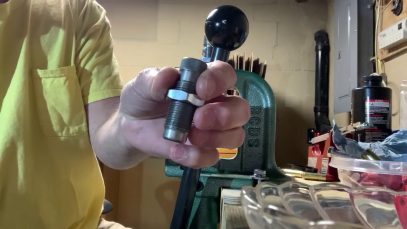 50 Beowulf. Resizing so they will chamber 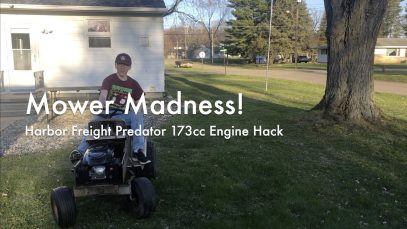 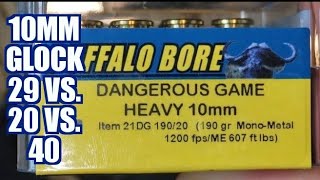